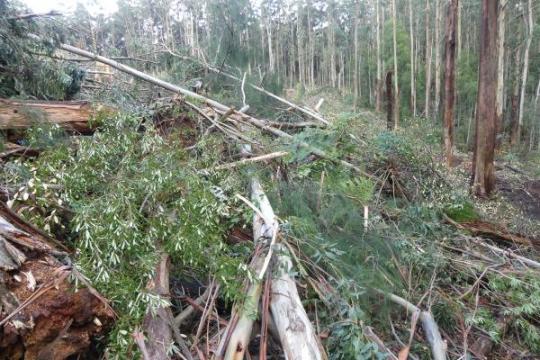 This morning community group Forest Conservation Victoria discovered illegal logging of a threatened species of tree, the Tree Geebung (Persoonia arborea) in an area they have blockaded for over a week.

A report has been submitted by forest survey group Fauna and Flora Research Collective (FFRC) to the Department of Environment, Land, Water and Planning (DELWP). Government owned logging agency VicForests are required by law to protect the Tree Geebung and have instead bulldozed some of the mature individuals in the coupe. The report states that 14 Tree Geebungs have been found and 6 have already been logged.

A conservationist is suspended 25m in a tree on a platform tied to machinery preventing logging from continuing. The forest is situated on the iconic Mt. Baw Baw tourist road, a popular and well used scenic route from Melbourne to Mt. Baw Baw.

Last year an independent review into DELWP's management of forests demonstrated the departments failure to regulate logging in Victoria and stated that their enforcement policy is completely inadequate. The department needs to ensure the protection of the Tree Geebung and investigate this illegal logging carried out by VicForests.

“The Environment department have repeatedly failed to prosecute VicForests for past cases of illegal logging. VicForests have been found to have illegally logged rainforest in East Gippsland but the case was thrown out by the courts due to the departments incompetence just last year, ” said Christine Schuringa of Forest Conservation Victoria.

“The logging industry and the environment department cannot be trusted to follow their own regulations. Time and again we have seen them continue to destroy threatened species habitat, log old growth forest in East Gippsland, and it has fallen on community members to hold them accountable,” Christine Schuringa said.

Last week threatened Greater Gliders were found within the Ballantynes Saddle logging coupe. Government records also show sightings of the critically endangered Leadbeater’s possum within a kilometre of the forest currently defended by protesters. It is unknown how large the Leadbeater’s home range extends but the law only requires a 200 metre buffer around a sighting of the possum.

Considering the rapid decline of threatened plant and animal species, it is critical that drastic action is taken to ensure their survival. This comes less than a week after the release of the damning UN Biodiversity report, which highlights that land-clearing and logging are pushing species to extinction.

“We are facing an extinction crisis in Victoria where ecosystems are being pushed closer and closer to the brink of collapse from logging. Weak state and federal environmental legislation, and a rogue state-owned logging agency mean threatened habitat is still being logged. Concerned citizens now have no other option but to take action in an emergency situation where the government is failing us,” said Sarah McConnell of FCV.

“While VicForests are trying to defend their rights to log threatened species habitat in court they continue clear-felling Victoria’s publicly owned native forests behind locked gates and believe they are a law unto themselves. The so-called ‘progressive’ Labor government has repeatedly failed to ensure that our precious and unique plant and animal species are not being logged to extinction,” Sarah McConnell said.