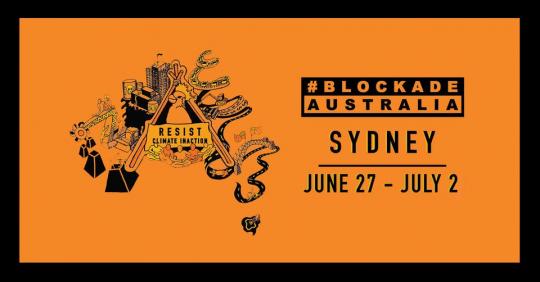 Gadigal Country of the Eora Nation

Converge on Sydney from Monday June 27th to blockade the streets of Australia's most important political and economic centre and cause disruption that cannot be ignored. We will meet in the CBD to participate in mass, disruptive action. More details to come.

For decades Governments on this continent have known about the threat of climate collapse, but have been blocking meaningful climate action.

As politicians from all sides spin lies and make promises about Australia taking meaningful climate action, this continent has already warmed by 1.44 degrees since pre-industrial levels. 1.5 degree targets, like those set out in the Paris Climate Agreement, are calculated political deceit, designed to pacify the public.

This exploitation system is creating an environmental crisis that threatens to destroy most of the life on Earth. Climate feedback loops, like the thawing permafrost, melting icecaps and burning rainforests, are becoming active. The climate crisis is nearing the point of no return.

The past decades have shown that appealing to the good will of a system designed to exploit gets us nowhere. We need to look past sporadic, symbolic action which sees empty streets the day after a rally of thousands. Only with consistent and strategic disruption can we create space for real change.

Blockade Australia is calling on everyone willing to stand for a livable planet to unite and converge on Sydney, to cause sustained disruption to Australia’s most important centre of political and economic power.

The Australia we confront is the same force that committed genocide against First Nations peoples across this continent.

We pay our respects to all First Nations People, their Elders and children; their resistance and unceded sovereignty.

Facebook event
Register / get tickets for this event
www.blockadeaustralia.com