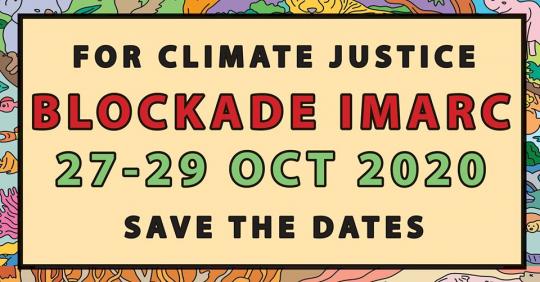 Blockade IMARC – For Climate Justice. Put in for leave now! Promote this event far and wide. We'll be back in 2020 to blockade IMARC from 27-29 October.

Some of the world’s worst climate criminals are gathering in Melbourne from October 27 to 29. Companies that profit from fuelling climate change, stealing Indigenous land and exploiting workers will gather at the International Mining and Resources Conference (IMARC). Their actions drive animal extinction as well as mass displacement of people.

With the climate entering meltdown, it’s urgent to disrupt the “business as usual” of major climate criminals, using mass civil disobedience. Thousands of people will be gathering to blockade this conference. Join us!

This event brings together students, climate and mining activists, trade unionists, animal rights and other community activists to stand together in solidarity to "Blockade IMARC”. We’re standing up for a world where respect for people, animals and the planet comes before profit. We’re working on a counter conference, including talks, workshops, films and more, to be held in conjunction with the blockade – stay tuned for details!

This blockade, and the organising for it, is taking place on stolen lands of the Boonwurrung and Woiworung people of the Kulin Nation. Indigenous people worldwide are the most affected by mining and lead the resistance globally. ALWAYS WAS, ALWAYS WILL BE ABORIGINAL LAND.

1. Please share this event!
2. Sign up to be part of the campaign – trainings, workshops, organising and more: https://blockadeimarc.com