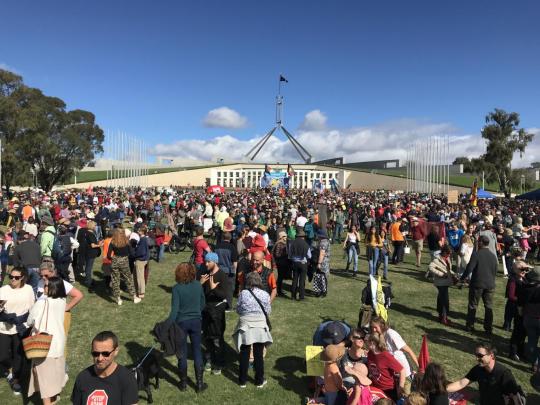 Federal Parliament reopens on 4 February 2020, we must use this opportunity to show a united front to our government that action must be taken to address the climate emergency and that the people of Australia will no longer accept complacency and denial of the truth.

We will be gathering on the lawn outside of Parliament House in Canberra to show a united front against the ignorance shown by our government in the face of this climate emergency, and to demand that they step up and do something.

The People's Assembly is a coalition of climate action groups and supporters who are ready to make a stand to our government to demand that they stand up and do something to help fix this problem we now face.

The time has come to fully realise that all of our many climate action groups have the same goal - to immediately acknowledge the actual climate emergency; follow the science; and take immediate necessary action. This will be a great opportunity to show our unity and strength of purpose and join together in a very powerful symbolic and practical way.

Our Home is on FIRE! There is the urgent need for us to join together in solidarity and take ACTION! This event is a both a promise and fulfilment of powerful and sustained united action of humanity in crisis at the beating heart of political power and life in this great land we call home.

There will be a large tent set up on Parliament lawn (Federation Mall), with amenities for attendees. The tent will be a place for people to show their presence to parliament as they enter, as well as an invitation of politicians to talk and engage with the Assembly.

Whilst the event will officially take place on the opening of parliament, there will be a number of activities leading up to, and following.

Week starting Mon 27 Jan (or possibly earlier): The proposal is to initially locate at the Aboriginal Tent Embassy – emphasising the connection and importance of working with First Nations people.

Representatives of the Tent Embassy and the Ngunnawal people (Canberra is on Ngunnawal country) have been approached and they have indicated support in general for the initiative (consultation is continuing).

Sun 2 Feb: CEREMONIAL PROCESSION TO PARLIAMENT HOUSE & FUN DAY: Starting the action on a Sunday to allow involvement of people not available to come to the official opening on the Monday. This will be an opportunity to have some family friendly and fun events and to make connections with the coalition. Our response will continue after the demonstration.

Mon 3 Feb: OFFICIAL OPENING of the Peoples Climate Assembly, including:
(i) Formal opening, with First Nations people leading the way
(iii) Invitation to at least nine pro climate emergency action MPs from both lower and upper houses to address the Assembly
(iv) Invitation to leading climate science experts and other leading climate figures to address the Assembly
(v) Major shared public - politicians lunch and mingle opportunity on the lawns in a child and family friendly atmosphere open to all.

Tues 4 Feb to Thu 6 Feb: Continuing activities on PARLIAMENTARY SITTING DAYS. Our goals will be:
(i) Carryover of addresses by MPs and climate experts
(ii) People positioned on all four road entrances with placards
(iii) Lobbying of politicians and their advisers in Parliament House
(iii) Music and other performances. Evening open-air film shows.

New Dreaming is a sister group, consisting of First Nations Elders and supporters who aim to bring people together to discuss and develop an actionable blueprint for a restoration of the environment in Australia, harmonious living of the people wiht the land and each other and healing between us all. Follow New Dreaming Australia via their Facebook page.

For real change to come into place we must continue to work together as a united front.

*** All details are subject to change***