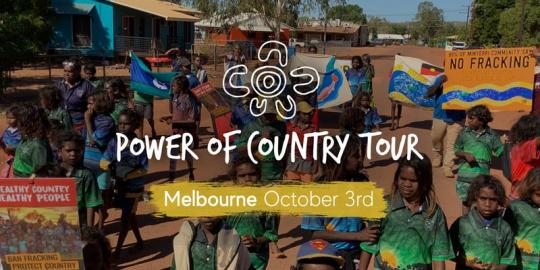 Traditional Owners should have the final say about what happens to their land. That’s why they are leading this fight to protect country, taking a stand against oil and their plans fracking gas fields and sharing their vision for a cleaner, safer, healthier future for us all.

Join a national movement of people taking action with remote Aboriginal communities from the Northern Territory at the Power of Country Tour. You will hear from an inspirational First Nations panel who are on the front lines of the fight against fracking. Joining them will be energy experts explaining just how great the threat of gas is for our climate and why it can't be part of our transition.

A brighter future is possible, with clean renewable energy that doesn’t wreck water, trash land rights and sacrifice communities for profit. Come to the Power of Country Tour and find out how you can take action to secure a safe climate future for everyone.