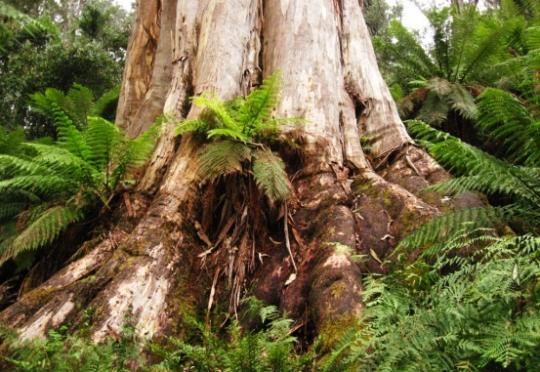 On 12 May, logging company VicForests announced that the Eden based woodchip giant South East Fibre Exports will stop buying woodchips and logs sourced from East Gippsland's forests at the end of this year. This is momentous news after forty years of campaigning for the areas protection. Does it mean the end of logging in East Gippsland?

From the looks of VicForests' media release they've been blind-sided by this change and didn't have time to put in the positive spin – besides to say at least people now have certainty, about the industry’s uncertain future.

Industry players interviewed on ABC radio the following day all presented badly. SEFE's decision has clearly been a shock. But is this really the end of logging in East Gippsland's high conservation value forests?

When asked if SEFE will be taking any logs or sawmill waste from East Gippsland mills, SEFE General Manager, Peter Mitchell told ABC, “Not, not . . . from certain sawmills, we’ll be stopping their supply to us but others we’ll continue . . . perhaps." When asked when the decision was made, Mitchell responded, "Umm, that’s really something I’ll keep to myself actually. I don’t think this is worth sharing with anyone else.”

Reading between the lines it looks like this could spell collapse for the entire East Gippsland logging industry. Very likely, no alternative customers exist to buy the 200,000 tonnes of what the industry calls "waste" – wood that is not viable for saw logs. But VicForests are talking up possibilities to placate those remaining in the depressed industry. Woodchips and waste are the bread and butter of the East Gippsland industry. It seems pretty straight forward: no market = no industry.

No one from the logging industry could be drawn on how many jobs might be lost as a result of SEFE's decision (the fact is not many in the big scheme) and they claim there will still be an industry in East Gippsland, they just need to find ways to sell low grade wood. However, one mill owner has already stated he might have to close down if there were no markets for his waste.

The reason for the decision by Nippon’s shareholders (the owners of SEFE) to stop buying East Gippsland waste wood is due to: a structural shift in traditional markets and decommissioning of mills following the tsunami; increase in plantation chip supply from Vietnam and Thailand; and change in ownership of managed investment plantation schemes – ramping up export woodchips from Aussie plantations.

New South Wales has just passed legislation allowing the burning of native forests for electricity generation to be classed as "renewable”. This allows the logging industry's customers to gain financial credits, making the industry's continuation more viable. Logging companies will also be able to cut forests down that were previously unsuitable for paper making – such as the darker species. We need to keep ahead of this possibility.

Logging industry reps are yet to give a clear answer as to whether the Eden woodchip mill will continue to buy wood from New South Wales – the answer was "talk to SEFE about that". One operator admitted they have just seven months to find a large market for the woodchips and a lot of hard work needs doing.

The good news is, the biomass push has gone nowhere for the past 3 to 4 years. Two and a half thousand people have sent an online letter addressed to 30 or so energy retailers and fuel companies around the country letting them know they won't buy energy made from burning native forests. It's time to fire it up, please sign and pass it on as widely as possible.

The sawlog industry has been dying a slow death for the last 20 years as pine sawn timber has now taken over the building market. Woodchipping has provided more employment to Asian paper factories than in our own region since 1970. It looks like this could be the end, if we can knock out biomass.

SEFE's announcement has huge implications right across eastern Victoria. Nippon also owns the Australian Paper factory in the Latrobe Valley, the makers of Reflex Paper. This lost $26.5 million in 2013 and $20 million in 2012. Native forest logging is becoming a millstone around the neck of this company. Let's make it as heavy as possible.

Jill Redwood is a long time environmental campaigner and the coordinator of Environment East Gippsland, the longest running community forest group working solely for the protection of Victoria's last and largest area of ancient forest and surrounding natural environment. Jill has lived on her self built self sufficient property in Goongerah, East Gippsland for 30 years.